A few years ago (January 2011) on this blog I illustrated cancels from the 2 contract postal stations in Plattsburgh, NY.  Both are operated by local banks. The clerks are actually tellers that work for the bank. Clerks are any contract stations cannot be employees of the USPS.

This summer I stopped by the stations again to see what new cancels they might have.  At one of the stations, the teller gave me the canceling device and allowed me to service my own covers.

However at the other station, the teller said she couldn't do it since the envelopes weren't addressed and wouldn't be going into the mail stream.  She said I might use the envelopes for backdating documents I wanted to mail.  I explained to her what I was doing and that I have done this at many other post offices in the past.  But she stood her ground.  Finally, she said she would call the main Plattsburgh post office and get their advice, which, of course, was "go ahead and do it.  It's OK."

One of the "joys" of pursuing cancels. 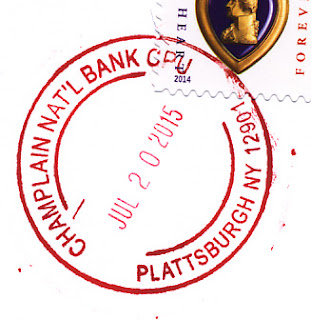 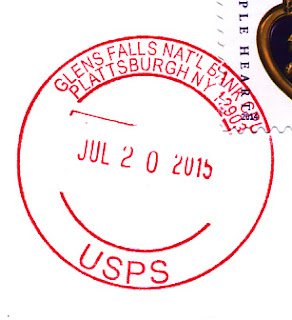 Notice that the cancel have different ZIP CODE since they are located in different sections of the city.  12901 is for the city of Plattsburgh.  12903 was formerly used by the Plattsburgh Air Force Base branch office until the base closed in the mid 1990s.  Since the Glens Falls National Bank office is located in the same area of the city as the old Air Force base the 12903 Zip was assigned to it.

For many years I was fortunate to have access to the mail of a fairly large internet company in northern New York.  I was really only looking for used modern commemoratives which I would soak off and sell to fellow stamp club members. By 2014 I had decided to stop asking for the mail since there were hardly any commemoratives on the mail anymore.

Of course, I would also keep my eye out for unusual cancels.  I call these unusual since it's more difficult to find hand cancels on mail because most mail is cancelled at local processing centers with their machine cancels.

The 2005 example was mail that had become creased in the machine canceler and was caught by a postal worker and hand canceled. The 2010 example probably began its life in West Chazy as evidenced by the "12992" Zip in the computer vended postage. The cancel is from Plattsburgh 12901. 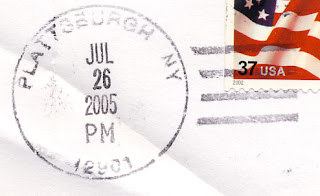 It looks like the Plattsburgh Sectional Center decided against running the mailing through the machine and used this unusual rimless hand cancel.  A nice example of modern commercial postal history made by a stamp related organization. 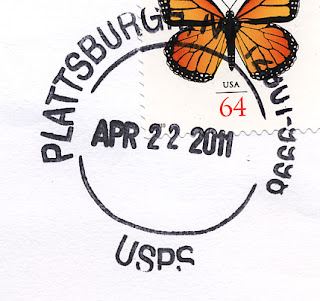 Perhaps the most unusual item I found in my years of accumulating mail was this item from my hometown.  I collected the mailing about once a month early in the month.  Of course, the material sat around for a few days until I could find the time to sort it all.  Imagine my surprise when I saw this hand cancel from the Westport post office which is just 2 blocks from my house.

The next day I went into the post office and asked about the cancel.  The postmaster told me that he had  ordered a new hand cancel at the beginning of the year and when it arrived he discovered it wasn't exactly what he had ordered. He used the cancel for a day or so and then decided to return it for a cancel with a rim.  This may be the only example know. 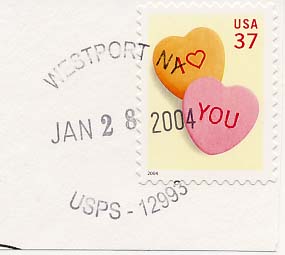 Don't forget to check out my other blogs:

My other hobby:  photography

One of the more challenging aspects of contemporary postal history is Rural Stations.   These are post offices that don't have postmasters and are under the jurisdiction of a larger post office.

It is especially difficult to find non-philatelic uses from these stations since many of them had very little postal business.  Most examples found are on postal cards sent by collectors for examples for their collections. 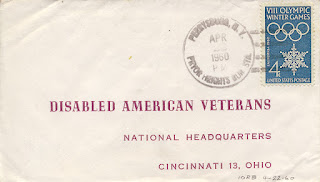 Pryor Heights was a rural station of Perrysburg in Cattaraugus County from June 1, 1953 to June 18, 1960 so this is a late use from the station. 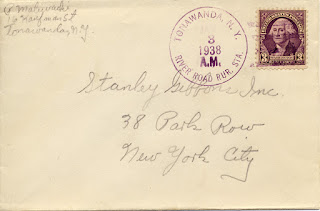 As we approach the 100th anniversary of the US entering World War I in 1917, we should remember that wars take money to wage.  One of the ways of financing a war plus keeping prices down is to try to sell bonds.

In 1917 the 2nd Liberty Bond campaign was held in the early fall which eventually raised $3.8 billion from bonds sold at 3% interest to 9.4 million people.  These bonds were for 25 years redeemable after 10 years.

The United States Post Office Department was an integral part of the publicity for the bond campaign utilizing its canceling machines with a special slogan "BUY NOW U.S. GOVERNMENT BONDS 2ND LIBERTY LOAN".

Most postal stations in NYC used the slogan in October 1917.  The same slogan was also used at major   US cities during the same month. 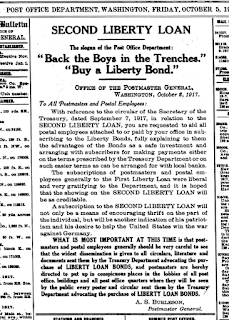 Posted by Glenn Estus at 1:05 PM No comments:

Here's a late use of the Rouses Point / Clinton Co. N.Y. / Registered "postmark".  I have seen this used on Registered Receipt cards from the early 1890s.

Any County named postmark after 1890 is very unusual.  Seeing one from the early 1900s is almost as scarce as hens' teeth. 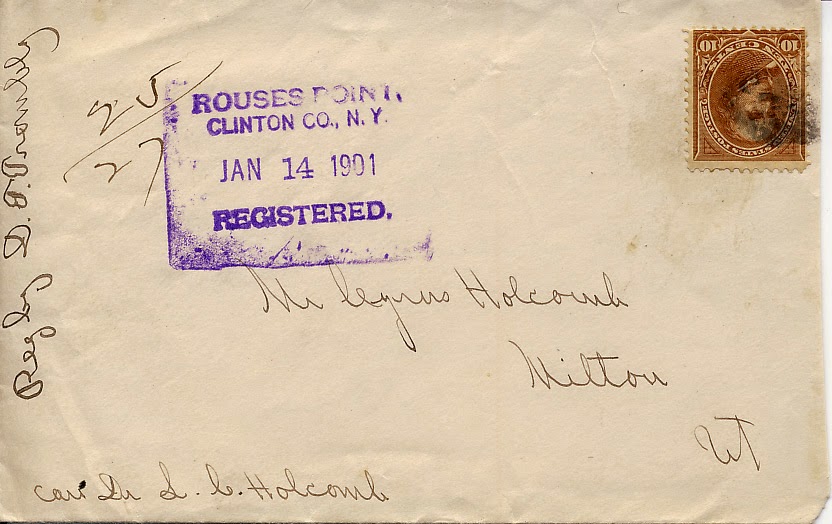 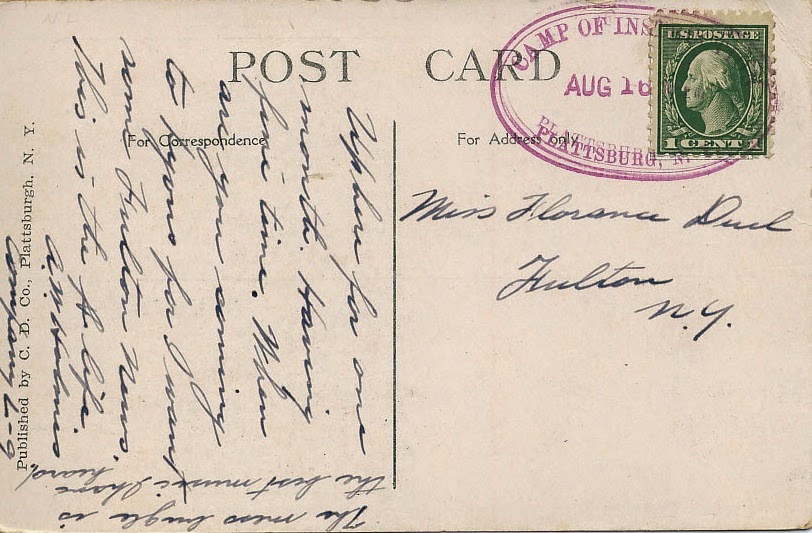 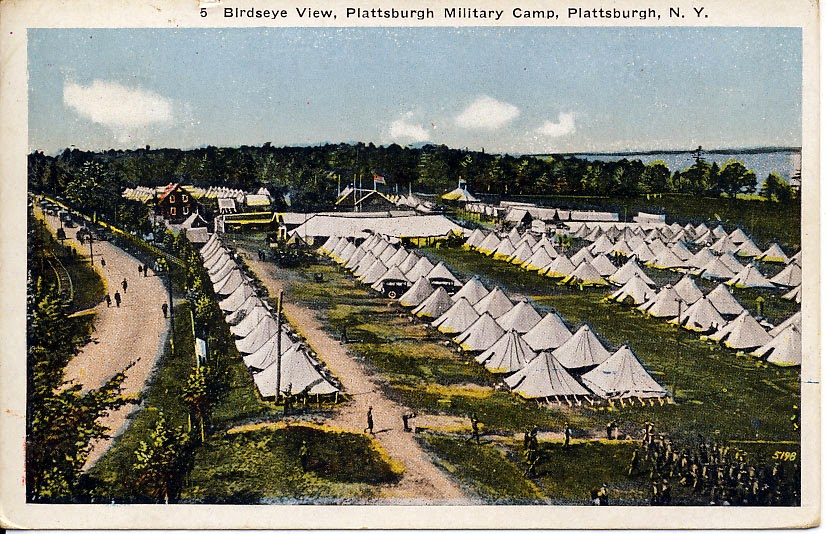 Until 1995, Plattsburgh (Clinton County) had had a military presence since the late 1790s.  In the 1910s it was the training ground for future officers.  The Plattsburgh idea eventually morphed into the current ROTC program.

There has been no record of this oval handstamp used in 1916 or 1917.  However, in the historical files in the Special Collections of Feinberg Library at SUNY Plattsburgh, I found an old Camp of Instruction newspaper which says that the YMCA established a post office tent for the use of the soldiers.  Since the cancel is definitely not a standard cancel, I'm wondering if this was used at the Post Office tent before taking the mail to the main Plattsburg post office for mailing.

After 40 years of collecting Plattsburg and Clinton County, I have 3 examples in my collection, all purchased in the last 10 years. None of the 3 examples show the year date, which leads me to think that it's not an official postal marking.  But, still a marking that traveled through the mails.
Posted by Glenn Estus at 5:06 AM No comments: 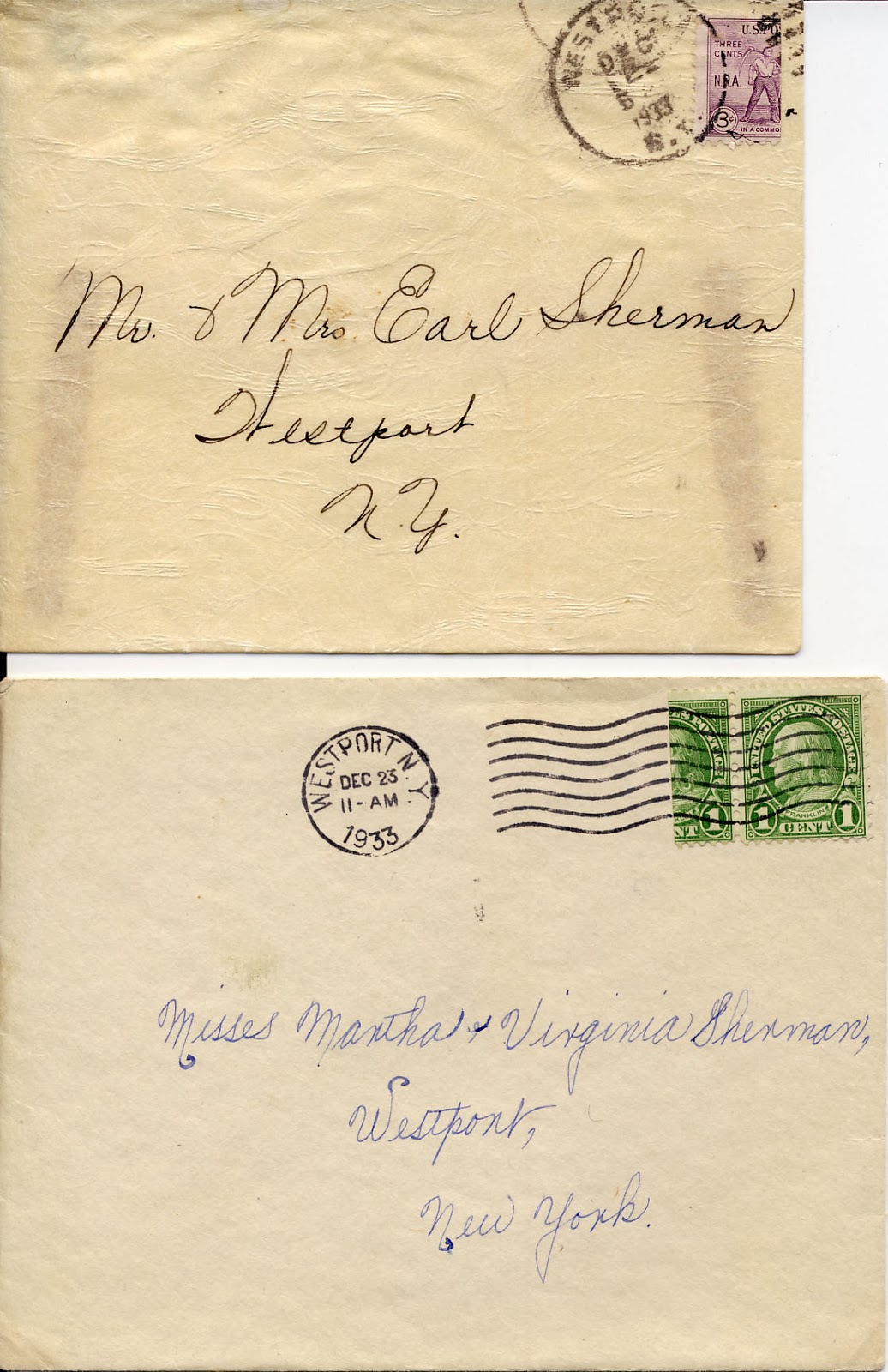 It seems that there must have been a shortage of 1 1/2c stamps in 1933.  Here are two Christmas card envelopes using a bisected 1c stamp and a bisected 3c NRA stamp to pay the local rate.